“I can't begin to describe my love for Wild Bunch. From my first point of contact with Laurel to the end of my hike, the service was AMAZING! I traveled on business but wanted to see some of the scenery that Arizona has to offer. I was not only lucky enough to have Matt as a guide, but was able to meet and hug Laurel, as she also met me at the trailhead. I had an absolute amazing time with Matt. He was so knowledgeable about the desert and made the trip so much fun. So much so that I tried to figure out a way between business meetings to fit it another hike. They were both also able to help me navigate my entire trip -- filled with amazing recommendations for dinner and things to do. I feel like we are all friends now!” – Lindsey on TripAdvisor, May 2019 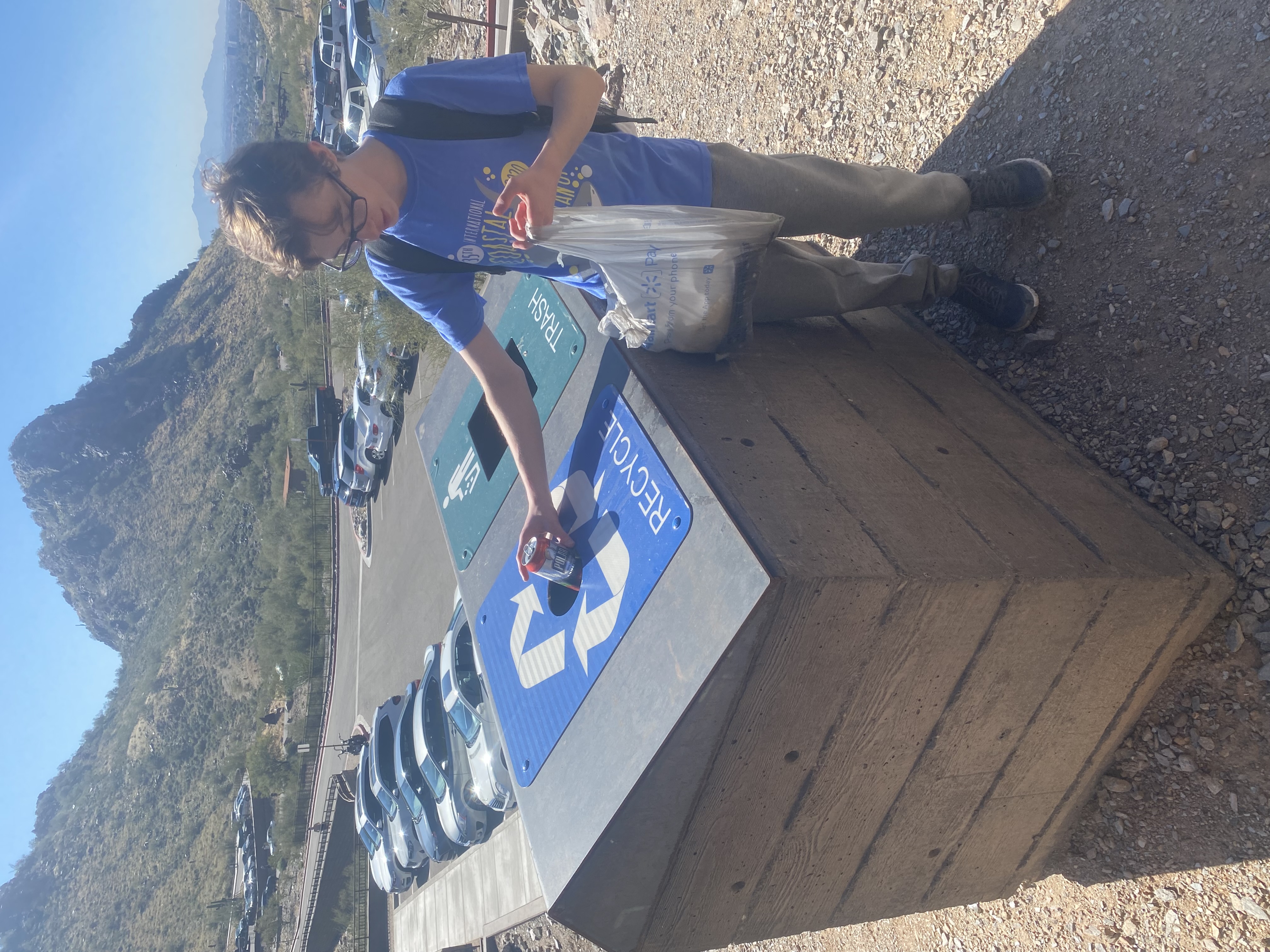 Florida's Ryan Moraleutz, 14, recycles some of the trash picked up during one of the Phoenix hiking tours offered by the Wild Bunch Desert Guides.


Among several phone calls the other day, the absolute best came from my longtime and loyal guide Matt Kalina.

The Superman of adventure tours Phoenix/Scottsdale was SOOOOO excited to tell me all about the epic Phoenix hiking tours group he had just guided.

“You know what?” Matt finally concluded. “I’m going to write a Blog post for you because there is so much stoke and coolness involved.

“We had a celebrity out there from the Ninja Warrior world – a kid who’s got a ton of YouTube followers. He and his friend are only teenagers, but they are already national figures with a super message for conservation of our environment. It was such an awesome experience.”

I was so honored by the offer – and it means so much to me because not only is Matt the most-versatile adventure guide in Arizona but also a trained journalist.

Before moving to the Valley of the Sun in 1999, Matt was a reporter and editor of a daily newspaper in his native Wisconsin, as well as a journalist specializing in economic change during his travels in Eastern Europe.

Matt now is a marketing and public relations specialist locally – as well as a professional adventure guide for a wide range of active-sports disciplines, including hiking, backpacking, climbing, canyoneering, rappelling, kayaking, stand-up paddle boarding and mountain biking. His interests also include everything from surfing to Ultra running.

Matt holds outdoor certifications including PADI Open Water Diver, Basic Sailing and Wilderness First Responder. He is an avid wilderness conservationist, a member of the Arizona Mountaineering Club, a steward with McDowell Sonoran Conservancy, and a founding board member of Friends of the Sonoran Desert National Monument.

For me, I am so fortunate that Matt is a great friend and collaborator, who always is helping me out with Wild Bunch Desert Guides by thinking of ways to improve my small mom-and-pop specialty shop’s business.

When Matt opened his company, he called and was very honest and upfront about his goals and desires.

Thankfully, Matt continues to guide for the Wild Bunch, too, while keeping everything separate. He is a trusted partner where I am never doubting or wondering about him “taking away guests.”

Even though we technically own “competing” hiking companies, it makes my heart smile that we work so well together.

Matt always is coming up with kick-ass ideas and is never afraid to share – and the following awesome “tale from the trail” is the latest and greatest example of that. 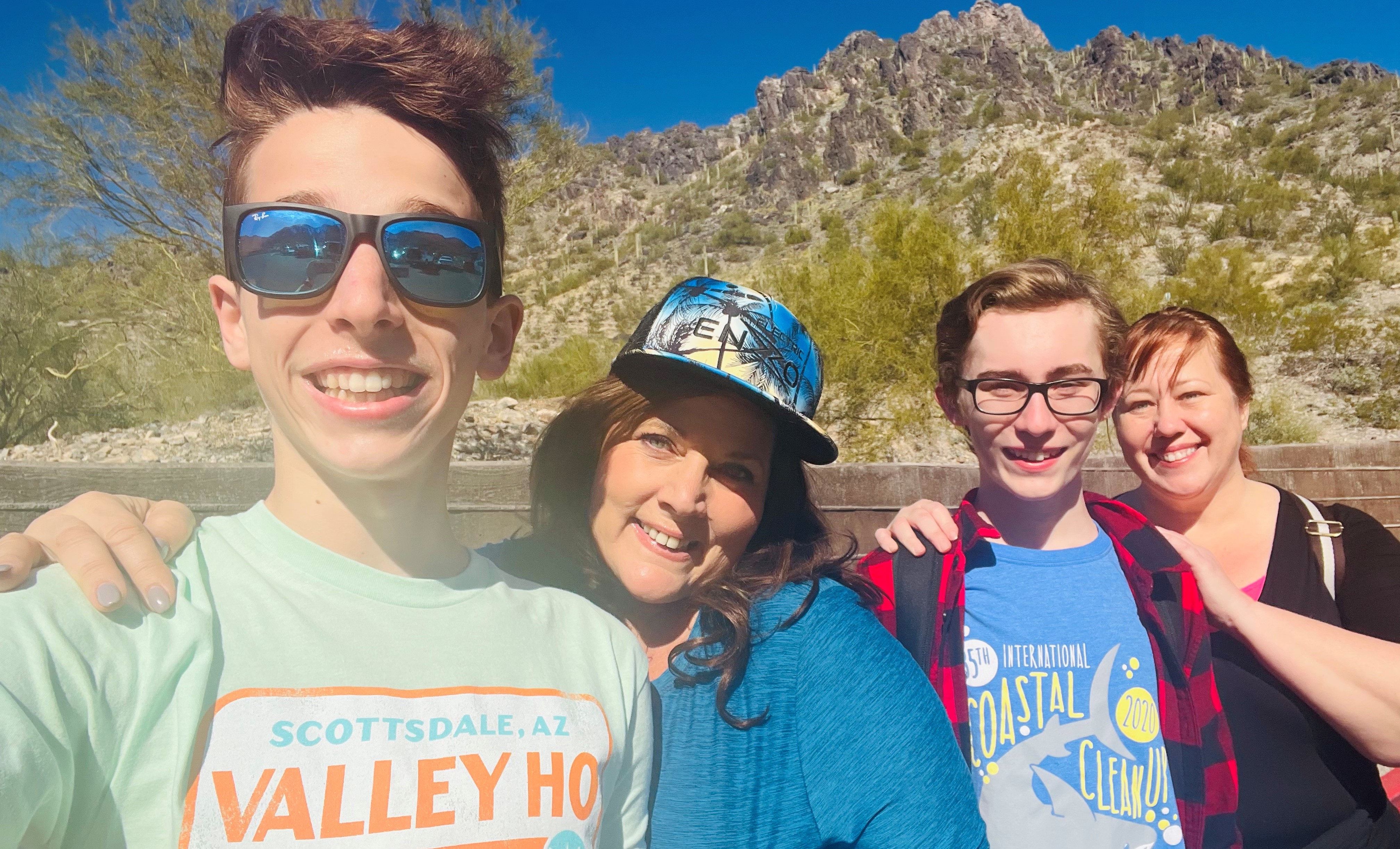 Picking up the Sonoran Desert during one of the 5-star rated Phoenix hiking tours from the Wild Bunch are (left to right): Enzo DeFerrari Wilson, 15; his mother Christine DeFerrari; Ryan Moraleutz, 14  and his mom Angela Moraleutz.


Teens clean up with Phoenix hiking tours
BY MATT KALINA, WILD BUNCH DESERT GUIDES
Two youth ocean conservationists from Florida brought their intensity, good spirit, and inspiration for protecting the environment to Arizona during Super Bowl week -- but not before delivering a giant-sized football made from trash they found in the ocean to Los Angeles, Calif., and the site of Super Bowl LVI.

Enzo DeFerrari Wilson, 15, and Ryan Moraleutz, 14 – a pair of high schoolers from the Tampa Bay Metro Area -- joined the Wild Bunch Desert Guides for a two-hour guided hiking adventure in the Phoenix Mountains Preserve on Feb. 6.

The boys, who have been friends since they were youngsters, picked up litter in the Sonoran Desert during one of the Wild Bunch’s 5-star rated Phoenix hiking tours.

Fortunately, there was not much trash along the trail as they shot video of their journey for their social media channels.

“There’s one!” Ryan yelled, picking up a scrap of paper along the trail and popping it into a bag he carried during the hike.

“Every little bit counts,” Enzo said. “Everyone can do their part by picking up just one piece of plastic or trash.”

Angela Moraleutz and friend Christine DeFerrari accompanied their sons on the hike in Phoenix, which started near the trailhead at Piestewa Peak Park.

The rocky route followed ridgelines and basins formed about 14 million years ago with much of the terrain made up of metamorphic granite called schist.

Ryan pointed out that the desert shares some of the same environmental threats as oceans do — and in interesting ways, the desert resembles the floor of the ocean.

“Some of the cactus here actually looks like coral,” Ryan said, pointing to a branching woody buckhorn cholla cactus, which is native to the Sonoran Desert and a feature on adventure tours Phoenix/Scottsdale. 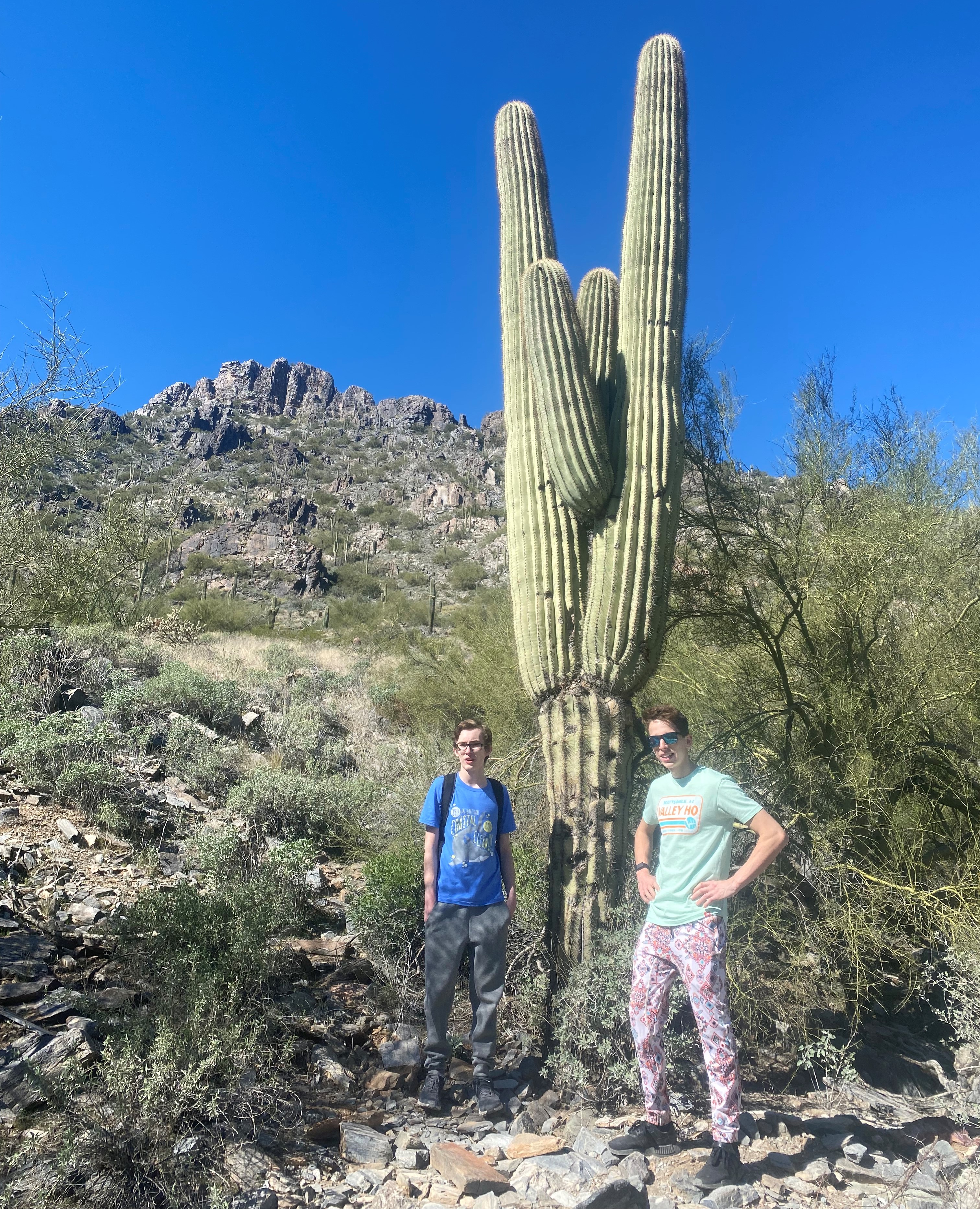 Ryan and Enzo pause to pose in front of a cactus during their hiking tour in Phoenix with the Wild Bunch Desert Guides.


Ninja hiking tours in Phoenix
The two teenagers made one of the Wild Bunch’s Phoenix hiking tours part of their pit stop in the Valley of the Sun after their trip to California to deliver the giant-sized football sculpture in advance of this weekend’s Super Bowl.

The artwork was made from trash and plastic waste found during beach cleanups along the ocean waters near their home in the Tampa Bay Metro Area.
*
The objective of the sculpture is to raise awareness about ocean pollution and to get more people to support cleaning it up.

Enzo and Ryan were named official artists for the 2022 NFL Super Bowl Fan Experience in Los Angeles after making similar sculptures for the NFL’s season-ending extravaganza the previous two years, including for last February in their hometown.

“Everything on the (four-foot long football) sculpture is upcycled – from the paper mache to the trash to the (Super Bowl) LVI logo on the front,” Enzo wrote on an InstaGram post.

The artwork is on display through the weekend in the lobby of the NFL experience in the Los Angeles Convention Center.

“If you’re in that area, go check it out!” Enzo wrote. “Our goal with these sculptures is to raise awareness to the issue facing our oceans of plastic pollution through art. It’s been an amazing opportunity to work alongside Ryan for three years on these football sculptures now -- and thank you so much to the NFL for inviting us back for this amazing cause again. Can’t wait for next year!”

Ryan heads up an organization to help mitigate plastic waste in oceans around the world, creating Fishes Wishes when he was only 4 years old.

Ryan sells sculptures he has made from beach trash he and his family have collected during their regular beach clean-ups. The profits from those sales are donated to ocean conservation efforts.

Ryan has partnered with O.N.E. -- Ocean Needs Everyone -- founded by his buddy Enzo.

“Electric Enzo” even found time to participate at an American Ninja event in Metro Phoenix the same day after a hiking tour in Phoenix with the Wild Bunch Desert Guides. 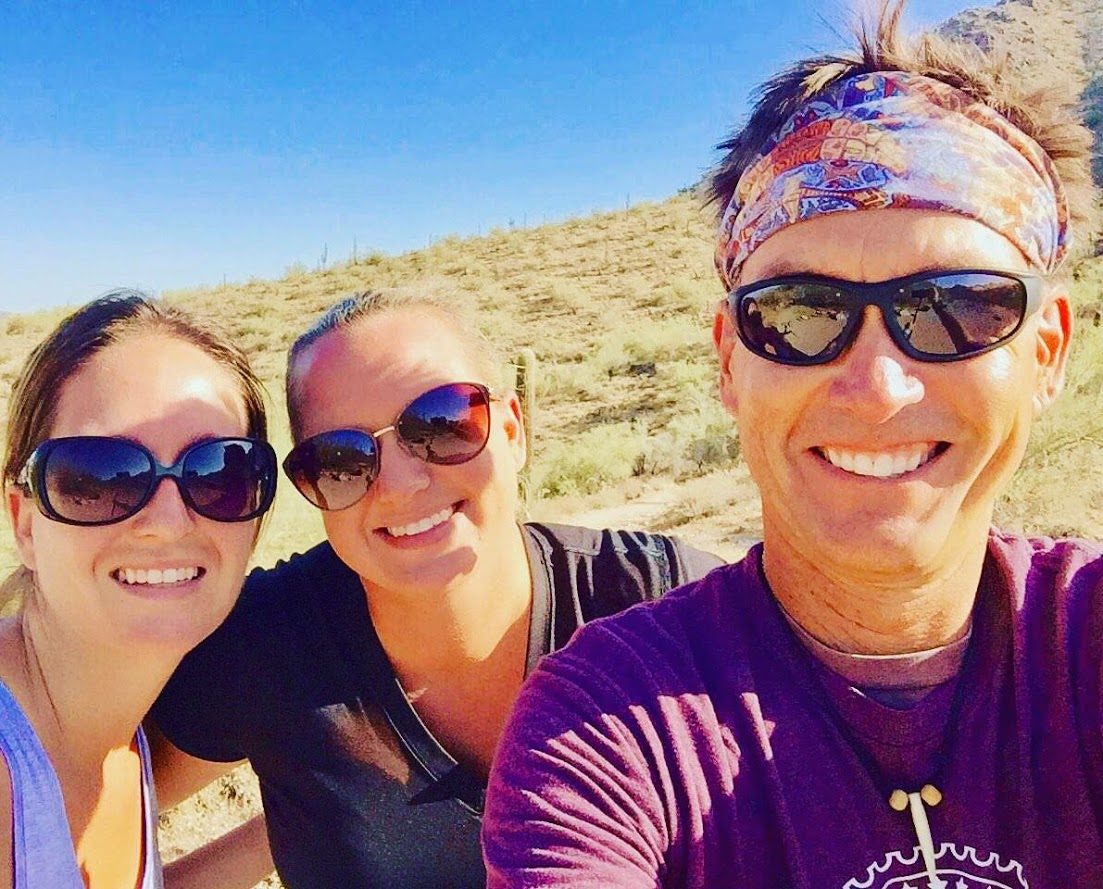 Matt Kalina (right) poses with a pair of hikers while offering a private guided adventure for the Wild Bunch Desert Guides. Matt, who shared the experience with the youthful conservationists featured in this Blog, is one of the most valued and versatile adventure guides in Arizona. To book one of the 5-star rated Wild Bunch Desert Guides adventures, visit https://www.wildbunchdesertguides.com or call (602) 663-0842.

Summer is here and that brings special hours for tours. Click here for details. 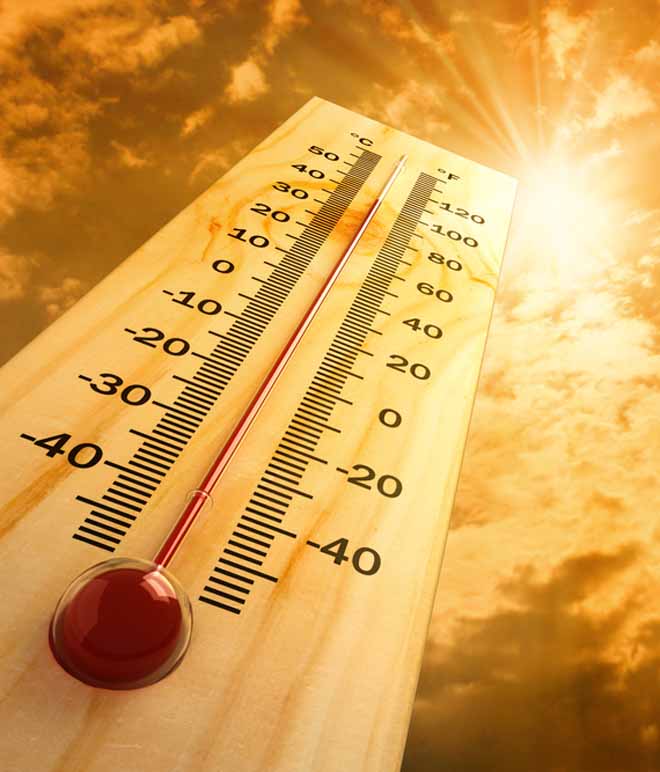 My brother had never been on a mountain bike ride in the desert, so while he was visiting - I called a top notch company - Wild Bunch - to give him a great experience. Not only was our guide "Don" knowledgeable about mountain biking, but also the desert plants and animals. Don observed our riding and adjusted the ride based on our skill level. It was an unbelievable ride, saw a coyote and a roadrunner. The mountain bike techniques Don shared, helped us maneuver the bikes and feel much more confident as we ventured through the desert. Plus we were provided with all the necessary equipment (helmet, backpack, gloves, water bottle, lip gloss ;-) to make this an enjoyable, exciting but safe experience. This is my second time with Wild Bunch and I would recommend them to everyone, at every level.

Thinking about scheduling a hike or bike ride with Wild Bunch Desert Guides, just do it and you won't be disappointed. My 15-year-old son wanted to do something different for Christmas Day 2019 and I am glad that we did. Even though he finished the trail ride, and I did not, we still had quite a memorable experience with Laurel and Tommy, company owner and lead instructor for the tour, respectively. They are second to none if you're serious about having the adventure of a lifetime.